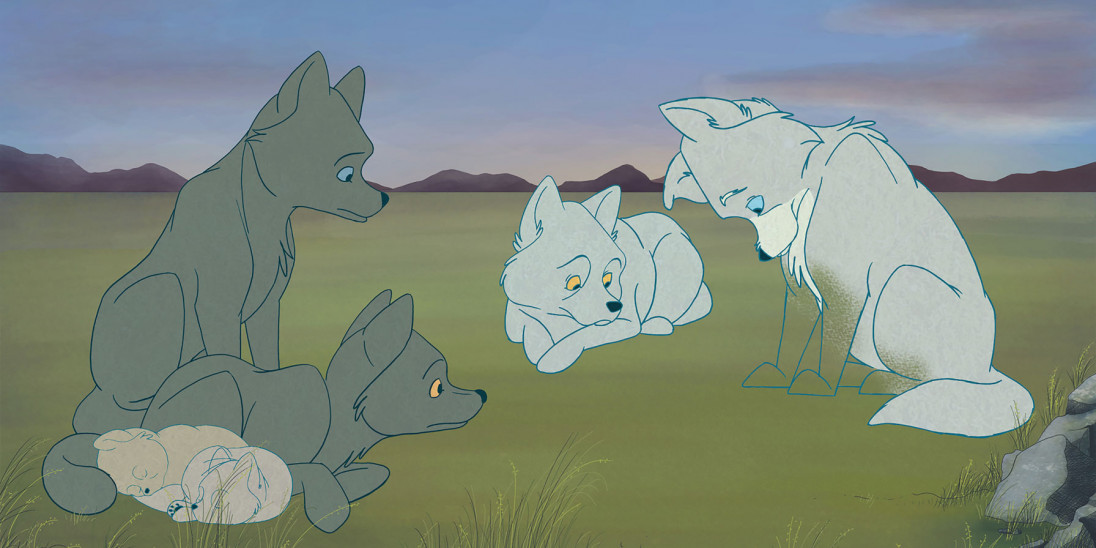 These animated shorts from emerging British filmmakers have been chosen collaboratively between Into Film and the British Council for their educational value and artistry. The films in the collection are:

• G-AAAH (directed by Elizabeth Hobbs; 1 min 15 secs; suitable for ages 7+): this abstract animation tells the story of Amy Johnson’s solo flight from England to Australia in 1930 via the medium of a typewriter.

• Ciclope (directed by Bjørn-Erik Aschim; 3 mins 22 secs; suitable for ages 7+): a delivery drone travels across vast landscapes before crash-landing with a gift for the person who finds it.

• Poles Apart (directed by Paloma Baeza; 11 mins 52 secs; suitable for ages 7+): a buddy comedy which sees a brown bear stumble into the life of a starving, skinny polar bear.

• Spindrift (directed by Selina Wagner; 11 mins 43 secs; suitable for ages 7+): when a strange boy arrives, a girl who lives by the sea must decide between her humanity or living as an eagle.

• Perched (directed by Liam Harris; 10 mins 31 secs; suitable for ages 5+): a man living in a submarine perched on top of a mountain encounters a troublesome bird.

• My Mum’s Got a Dodgy Brain (directed by Emma Lazenby; 6 mins 21 secs; suitable for ages 7+): animated documentary in which three children tell their stories of how they cope with their mothers’ mental illnesses in their daily lives.

• Perfect World (directed by Karni and Saul Arieli; 4 mins 24 secs; suitable for ages 5+): a boy and his mother travel through a world of frozen sugar.

• Leave a Print (directed by Christina Nerland; 5 mins 14 secs; suitable for ages 5+): a family of colourful arctic foxes must adjust to life as one of them begins to fade away.

• Invisible Barriers (directed by Mustashrik Mahbub; 2 mins 6 secs; suitable for ages 7+): animated poem attempting to encourage and empower girls all over the world.

• Fishwitch (directed by Helene Sifre; 9 mins 59 secs; suitable for ages 7+): an ocean witch living on an iceberg strikes up an unusual friendship with a singing sea creature.

PLEASE NOTE: The first film, G-AAAH, contains flashing imagery which may potentially trigger seizures for people with photosensitive epilepsy. The film is approximately 75 seconds long, but can be skipped with the ‘forward’ button if it may affect someone in your audience.

This programme has not been certified by the BBFC. Into Film suggest all films in this collection are engaging for ages 7+, with Perched, Perfect World and Leave a Print also suitable for audiences aged 5-7.

Activities to support engagement, debate and reflection for titles within the Anim18 Connections strand of the Into Film Festival.

A programme of seven short films, including an exciting mix of animation, live action and documentary, tailored to suit Primary clubs.

Fantastic collection of 13 short films from Pixar, the US animation studio which revolutionised computer animation techniques.

An exciting mix of new short films from around the world suitable for ages 7+ put together by Into Film young programmers.

Also new in cinemas are 'Mary Shelley', 'Uncle Drew' and 'The More You Ignore Me', with 'Lady Bird' leading this week's DVD releases.

"It really is a chance for us to open children's minds to the power of film not just as a vehicle for entertainment but also as a way in to understanding their own world and the worlds of people whose lives are very different."