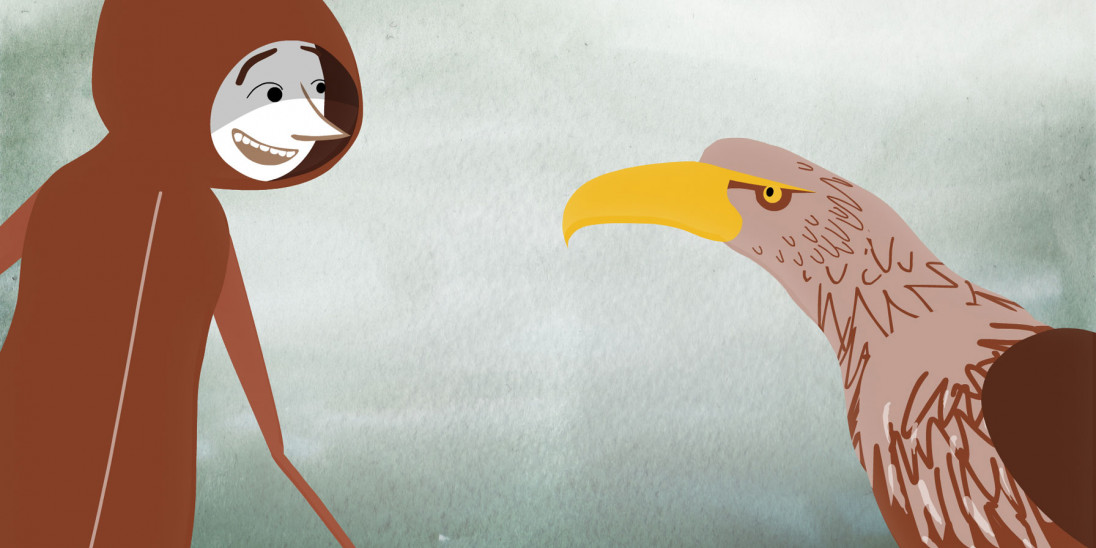 These animated shorts from emerging British filmmakers have been chosen collaboratively between Into Film and the British Council for their educational value and artistry. The films in the collection are:

• G-AAAH (directed by Elizabeth Hobbs; 1 min 15 secs; suitable for ages 7+): this abstract animation tells the story of Amy Johnson’s solo flight from England to Australia in 1930 via the medium of a typewriter.

• Ciclope (directed by Bjørn-Erik Aschim; 3 mins 22 secs; suitable for ages 7+): a delivery drone travels across vast landscapes before crash-landing with a gift for the person who finds it.

• Tough (directed by Jennifer Zheng; 4 mins 49 secs; suitable for ages 11+): animated documentary which uses an interview between a Chinese mother and her British-born daughter to explore childhood cultural misunderstandings.

• Beneath the Surface (directed by Yero Timi-Biu; 3 mins 23 secs; suitable for ages 11+): two friends grow up in London and experience the world very differently over a 25-year period.

• Coupling (directed by Cat Hayes; 2 mins 26 secs; suitable for ages 11+): a woman loses her glove on the way to catching a train.

• Poles Apart (directed by Paloma Baeza; 11 mins 52 secs; suitable for ages 7+): a buddy comedy which sees a brown bear stumble into the life of a starving, skinny polar bear.

• Stems (directed by Ainslie Henderson; 2 mins 24 secs; suitable for ages 11+): a time-lapse video which looks at the process behind making a stop-motion animation with puppets.

• Spindrift (directed by Selina Wagner; 11 mins 43 secs; suitable for ages 7+): when a strange boy arrives, a girl who lives by the sea must decide between her humanity or living as an eagle.

• Chickens (directed by George Wu; 4 mins 10 secs; suitable for ages 11+): the elephant in the room becomes a literal manifestation amid a blossoming romance in this black-and-white, hand-drawn animation.

• Homegrown (directed by Quentin Haberham; 9 mins 20 secs; suitable for ages 11+): gentle animation about the close relationship between a father and son who cultivate plants together.

• Boris Noris (directed by Laura-Beth Cowley; 3 mins 40 secs; suitable for ages 11+): slapstick animation in which two characters have a fight on a beach.

• Black Barbie (directed by Comfort Arthur; 3 mins 36 secs; suitable for ages 11+): told through a poem, this film examines race, media and culture via one woman’s experience.

PLEASE NOTE: The first film, G-AAAH, contains flashing imagery which may potentially trigger seizures for people with photosensitive epilepsy. The film is approximately 75 seconds long, but can be skipped with the ‘forward’ button if it may affect someone in your audience.

This programme has not been certified by the BBFC. Into Film suggest all films in this collection are engaging for ages 11-19, with the exception of Life Cycles which we have rated 14+ for scenes of infrequent nudity.

A resource to showcase and celebrate animation talent from across Africa.

The best of British short film in 2016 for secondary ages curated by the Into Film programming team.

A series of youth-centred stories about LGBTQ+ experiences in the UK and around the world created in partnership with distributor Peccadillo Pictures.

Short animated versions of Shakespeare's plays, the perfect way to get to know the work of one of Britain's greatest writers.

Twelve of Pixar's best short films, plus a batch of student shorts from some of Pixar's most highly prized directors.

Ben becomes a Film of the Month winner for the second time with his latest animation, which sees a resourceful light bulb trying to escape from confinement.

Also new in cinemas are 'Mary Shelley', 'Uncle Drew' and 'The More You Ignore Me', with 'Lady Bird' leading this week's DVD releases.

"The art of discussion has improved and the breadth of language used has been enhanced by the variety of films watched, all of which we order free from the Into Film website."