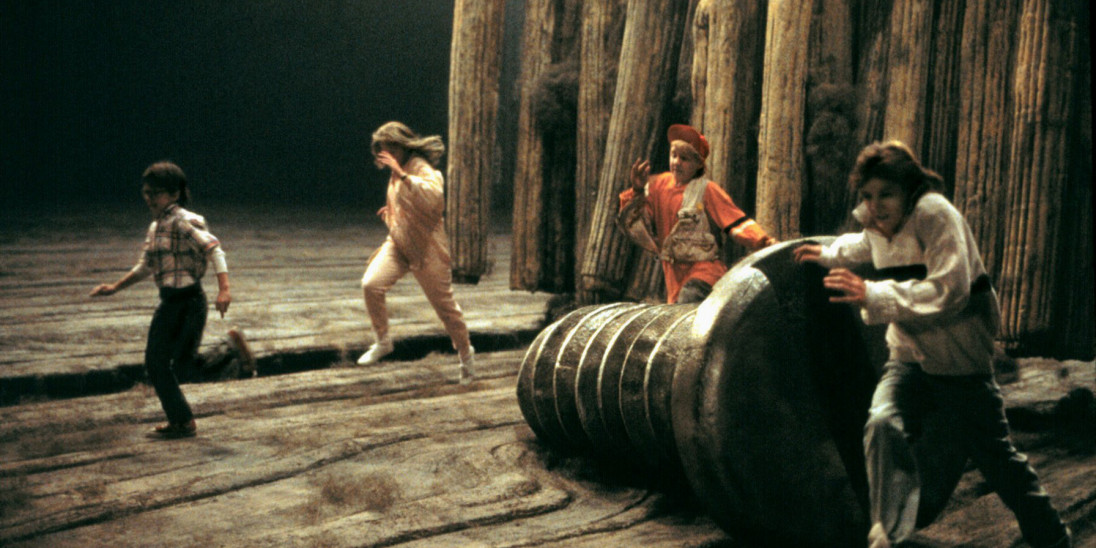 Fantastic special effects in this comedy caper following four quarter-inch children, shrunk by their bungling father as they try to escape the garden!

A GREAT FILM FOR A FAMILY!

"Honey, I Shrunk the Kids" is a quite unusual adventure/comedy film, one of the most eccentric movies of all time. It's one of those live-action films produced by Disney's studios.

The movie's title refers to Wane Szalinski, a stereotypical nutty/mad scientist. He invents the machine with the ability to shrink objects to a size even smaller than ants. This character is portrayed by Rick Moranis, the perfect actor for a role like this (with his intellectual looks)

Rick Moranis is funny as Wayne Szalinski, Matt Frewer is hilarious as the impatient and temperamental "Big" Russell Thompson. The kids also do a good job: Thomas Wilson Brown as the clever "Little" Russell Thompson, Jared Rushton as the paranoid Ron Thompson and Robert Oliveri as the nerd Nick Szalinski. One of the funniest parts for me is when "little" Russell forces his brother Ron to confess that he broke Szalinski's window with his baseball Szalinski kids (Nick and Amy) and the Thompson kids ("Little" Russell and Ron, the Szalinski's neighbors) are accidentally shrunk by the machine and thrown into the garbage by accident. Because they are so tiny, they live a big adventure full of dangers and nightmares (from insects to a remote-controlled lawnmower) until reaching their house, something which would only take seconds on their normal size. The story becomes a bit odd and of a somehow discussable taste, but it also makes the difference... for good and for bad. However, I must be fair: at least this is a thousand times better than those stupid "Problem Child" movies. Not that they have anything in common, but...Overall, nothing extraordinary, but amusing, hilarious, great fun, entertaining, original, bizarre and with some funny lines («French class» is just one among many others). There's also a certain 80's charm on it.

But overall Now, if they are to have any chance of being returned to normal size, Amy, Nick, Russ, and Ron must make a dangerous trek through their yard, facing a variety of dangers on the way.

this film is a great comedy and family film which I really enjoyed to watch!

Exquisite animation and lively score creates a fantastical backdrop for this classic story about the little people who 'borrow' everyday objects.

CGI-animated adventure revolving around a neurotic ant named Z (voiced by Woody Allen) and his quest to find romance.

Arthur And The Invisibles(2007)

Arthur And The Invisibles(2007)

Live action and computer-generated effects mix in this inventive tale of a boy on a quest to keep his grandmother's home from property developers.

Stuck with his evil aunts, James creates a magical, enormous peach. Befriending the charming insects inside, he attempts an escape.